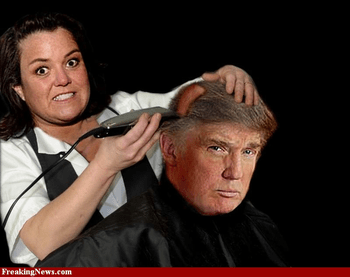 What I learned from Trump and O'Donnell - project me day 738

We all have to get back to reality at some point and it was my day today.
It started off with a refreshing and positive attitude considering I have set out so much to achieve this year and am trying very hard not to look back with any doubt or worry.

My first meeting cancelled, which isn't all that bad seeing as though I haven't sat behind my desk in three weeks.
#FollowSA is one of my priorities this year. Does it make me money as yet? That answer would be no. Is it giving me the greatest joy and satisfaction? That answer would be yes.

I've never denied that I'm?ambitious?and that everything I do is to forward my career and make my highly successful in the social media arena of South Africa. I've also never denied that #FollowSA is now part of my very big career plans and with that in mind I set out to define the concept of a hashtag that is truly making a difference in people's lives in South Africa. I'm not having the best day so my esteem needs to say that I didn't make that statement. Instead, the timeline is filled with comments about the impact #FollowSA is having out there.

Sadly, I know all too well that there is always a shadow to everything and the same shadow seems to be lingering even though I thought I had left it way behind last year. There was the online spat with someone I haven't met and then there were a few people in the industry who said they didn't want to be associated with me. I found that odd considering we really had few words and I admitted to my foolish actions. But it all became clearer today when another group of people said they needed to distance themselves from #FollowSA.

Thanks to my openness and working hard at being genuine, I gained enough respect for this individual to tell me why the distance needs to be kept. Apparently there are rumours going around about how I'm handling the prizes given to #FollowSA. Once again, I considered how to handle this in the blogging space and opted for my open policy of truth ... otherwise why am I blogging?

My fears?immediately headed in the direction of no one ever supporting #FollowSA again and no one ever wanting to hire Lifeology, but then a very famous dispute came to mind. It's so fresh in my memory because I'm currently watching The Celebrity Apprentice and Donald Trump takes any opportunity to be disgusting about Rosey O'Donnell.

To this day, despite all the shocking publicity and negative press and despite all that has been said to each other, in malice ... they are both successes in their own right. No one crashed and burned from the incident and no rumours tarnished anyone's reputation so much that we don't hear their names in all the right places.

We all need something to comfort our ego and despite?comfortably standing in my truth,?I still needed an outrageous 'Hollywood' story to calm me down and settle my mind on the first day back at work.

This is what project me is all about! This is why I blog and why I share truths about what is happening in the raw and real moment! Because on the very day when we are bravest and boldest and head out into the world with the most determination, that is the day that ?someone comes along and slaps you with hair piece.

I have decided that project me entail me knowing their are always two choice and throughout this year I want to share those two choices in the moment.
Today ?I could have either lashed out and told a few people to get stuffed and I would work around them but instead I took some sound advice and bravely took the first step to sort out these misunderstandings.

The toughest part about today was realising that no matter how hard I work at my reputation, I can never change how anyone feels about me or what they say about me. Therefore, I tell my truth, keep my eye on my dreams, have faith that everyone will take the time to see me for who I am and not what they hear and focus on the path I am on so that I don't trip over anything along the way.