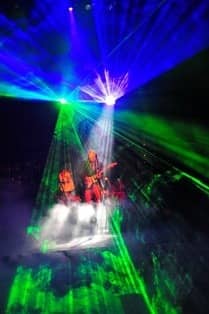 What must the Pink Floyd generation think of us? - project me day 595

My cousin passed away when I was about 11 years old. She was married into our family but my favourite of cousins none the less. She was the eternal child and used to keep chocolates hidden under the bed when her and my cousin (the real member of the family) lived with us. She was an incredible artist and I kept a picture of Jock of the bushveld that she drew for me when I was about 6 years old. I remember that picture, the way my family wept when she died from an asthma attack ... and my cousin (her husband) listening to Pink Floyd.

I remember the continuous play of music, that I was too young to appreciate, more than I remember how anyone dealt with the loss of the gentlest soul I have ever known. That's why I went ...

I knew I wasn't part of the Pink Floyd generation and I knew the chances of me remember anything more than 'another brick in the wall' would be a miracle. I also didn't mention my reason for going to anyone at all. Not when I received the invite from the Joburg Theatre, when I put it in my diary, told Mr Unexpected we had plans or when I sat in the show and held the hand of the man I love.

To be honest, I felt about two generations behind the majority of the crowd and couldn't believe that my memories of hours of listening to Pink Floyd amist mourning family members didn't strike up one memory of a song. That didn't take away from the fact that 'project me' has taught me to appreciate the little things when thrown into a foreign world and it didn't take me long to latch onto the theme for the evening.

I've seen a lot of shows in my life and I've had the privilege of seeing nearly every artist (besides the country artists that I'm never going to see unless I get my ass to the USA) and can mention one spectacular concert after the other. Stage settings to faint over and costume changes to drool over. Dancers and entertainment as the cherry on top.

And then there's the Pink Floyd generation ... the one that's about the music!!!!

I watched Mr Unexpected by mesmerised by the mechanics of the?phenomenal?lighting and knew that he would have given anything to have his camera there and snapping away at a dynamic display of lasers and dancing lights. I, on the other hand, was in awe of the singing and would tell anyone (Pink Floyd fan or not) to take the leap and enjoy the experience of true singing talent (spoken like a real Justin Bieber anti-fan) and play around with the meaning behind many?interesting?songs.

Is it this country girl's cup of tea? I'd say no ... seeing as though it's 'project me' and truth is so important along this journey. However, something made me envious of the older peeps in the crowd who were clapping, cheering, seat dancing and singing along to nearly every song. They had memories they could relate to every tune from "shine on you crazy diamond" to "run like hell" and it was amazing to watch myself watching them.

I live in an odd world where the music I listen to is know by a handful of South Africans. If I throw out my song list that includes "big green tractor" and "farmer's daughter" everyone would look at me like I had fallen out of a tree. Yet, all I ever ask of anyone is to respect why I love the music I do and not make me turn it off when they are in my home, my car or my life. They don't have to like it and I don't have to like the Bieber's and Gaga's of the world ... but they sing for a reason. They sing for their generation and their world and we are all entitled to choose the world we LISTEN to. So the Floyd generation, I hope you've done at least a Bieber or Gaga song ... and the hip hops of the world ... do yourself a favour and go watch Pink Floyd that's all and only about the music!

2 comments on “What must the Pink Floyd generation think of us? - project me day 595”