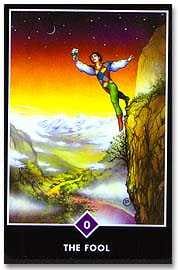 The fool perfectly depicted by Osho in his tarot deck

Years ago I studied tarot. Not as the art of fortune telling, but as a tool to help with my teaching and guiding through their life journey. It was one of the greatest gifts I gave myself and I still use it in my everyday life.

Most of the time it's when this crazy 'fool' jumps in front of my path and gives me that look that speaks a thousand words. He's usually asking me why I'm the hell I'm still clinging to the edge of the cliff and I haven't jumped yet.

So ... what happens when I get into that space ... you know... when clinging to the edge of the cliff is no longer an option? I make soup! Usually I make tea, but I had to serve a heart meal to the two people who are actually going giving the loving nudge that tips me over the edge.

Greggie gave me the strangest look yesterday when I had that 'deer in the headlights' expression at the thought of my website and new blog going live. I'm so glad I fed him such a hearty soup ... because I needed that 'you're so silly when you look scared' look.

My Knight, on the other hand, had created websites that I'm so freaking excited about that I'm bursting to show the world. Now that's worth a healthy helping of piping hot lentil and beef soup. The fool is a sneaky energy however, because it looks so tempting to jump that you don't really think about what's gonna happen after the jump. So ... the websites look great and I'm about to throw them out into the world, but then that one irritating thought crept into my mind ... CONTENT!!
I can honestly say that I had a strange day, half bedazzled by feeling myself slowly let go and awaiting the thrill of falling and then feeling myself about to let go and awaiting the petrified anticipation of falling about to kick in. And then something saved me! As yummy as my soup was, and despite the number of cups of tea I had, It wasn't food or drink for a change. It was a tweet ... that's what I love about twitter ... you have to time checking your tweets at just the right time to have those profound moments of perfect tweets, and this was one of them. The tweet very simply said: "If you're not scared, you're not paying attention". Perfect tweet!!

The archetypes courses begin this weekend. My knight has done such an amazing job on the blogs and website and they should be going live in the next few days, Greggie and I have made such awesome progress with the course notes and my content is tapering on being loaded. That all sounds super foolish to me ... and now all I have to do is let go and fly.

When I first studied tarot, we did a meditation where we went to meet all the?archetypical?energies that live within the world of the deck. ?Of all the characters I met that day, I remember the fool the most. He had already jumped and was looking at me with much surprise, wondering what I was staring at. He hadn't even realised that he was in mid air, walking amongst the crowd with his little sack of most important items on his back. He asked me why I was so scared and I told him that I was worried he would fall. He said it was impossible to fall because of what he was carrying in his little pack ... and when he opened it, there was only one ?thing ... a dove, flapping its wings inside the pack and carrying him through the air. Everyone thought I was loopy when I shared my visualisation, but the fool winked at me ... because apparently that's a great sign.

The crazy thing is that if I really look down, I leaped a freakin' long time ago. I've been floating through life with bravery and the energy of the fool for much longer than I've even realised. I just haven't realised it yet!

I know today's blog is in total teacher energy ... but that's what I do in order to teach not only the world, but myself too. I've needed to rely on my teacher energy to carry me through over the past few days and it's only made me realise the magnificence of my life and the choices I've made.
There's a fine line between being crazy and being the fool.

'Project me' was foolish enough as it is! So has every little step that I have taken each and every day!
The only thing I needed to remember is that nowhere is it written that the fool might not have been afraid or thought he was a little loopy when he looked out over the cliff ... but he did it anyway!

Ah ... it feels so good to write as the teacher for a while! That's exactly what the fool would do ... that, and feed the fellow fools who give the little nudge over the edge!