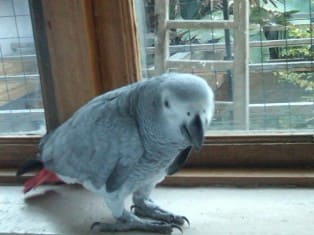 Why people should be like parrots - project me day 125

Meet Albie, who is no less than one of the family. She is officially my mother's sixth child and has become very accustomed to living the life of a queen, including a summer and winter outside house ... I might add.

Yesterday I got home and she was in the winter cage where the sun streams into her space and keeps her warm while she spends the day in the fresh air. I never know where she's basking until I get my "hello" or she's call me "Jo" and sometimes she'll cough or sneeze to get a little bit of attention. I kid you not ... she does a full on 'Hat-shoo" ... and then she blows her nose!

Greggie and I have been really consumed with formatting archetypes notes for the course that starts this weekend and I've been in my own bubble of making sure I don't run into the shadow side of none other than the?while we plan courses. With that in mind, I haven't been chatting very much about my sadness, and sometimes irritation that a lot of people in my life can't be more like parrots.

Albie doesn't care who says 'hello' first ... she sees anyone of us and burst into?conversation. ?When she gets food she doesn't like, she flings it out of the cage as we walk past ... but she's laughing moments later. She's never shy about making her racket and having her say ... she demands her "popcorn" and spends her days telling us off or huffing and puffing ... which she picked up from my brother. But she's never stopped talking because she's waiting for someone to greet her first.

I seem to be surrounded by that at the moment. It's so bad that I have a 20 year friendship weighing on the fact that a simple phone call just hasn't been made.
I've watched the boys I chat to and because I've just been so busy during the day and not wanting to become the workaholic during the night ... I haven't been my usual 'parrot' self and said hello as much. Guess what ... I haven't had one 'hello' back to me.
Ok ... there's on ... my shy picture dude who refuses to meet me, but always takes the time to chat. Besides that ... scotch mist! Oh ... scotch mist is my little phrase for 'now you see him, now you don't'!!!

I've left message for friends ... with unreturned calls!
I watch people sit on skype and msn and facebook chat ... yet I haven't had one 'parrot hello'.

I can hear the wining and the upset and most probably sound like such a child. The big question is ... 'why don't you just greet first, Jodene?' and the answer is simple. I will ... because I always do!
It's just been something to watch myself go through this and give myself the power of choice as to whom I'm going say my 'hello's' to. That's fair, isn't it?

Life also always holds a mirror and I know the friend or two, the special aunt and the guy I care for who I haven't 'parroted' either.
It's not even about pointing fingers ... it's about the missing, the sadness and the realisations.
So how does this all fit into 'project me'? It gives me opportunity to put myself first, tell myself the truth how I feel about each person and why and choose what I'm going to do with each person. The reality is that I know I might not speak to any of them again ... other's might eventually miss me and I them ... other's don't even realise that we haven't chatted and others ... well others are waiting for me to say something first because they are trying to work out where they stand in my life!
What would Albie say if she could give a little advice and say more than, "Do you wanna go outside?" and "I'm coming"?