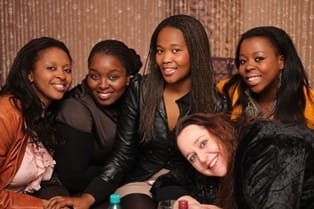 With this lipstick I can do anything - project me day 569

Thanks to The Venus Network and Bobbi Brown Makeup for an amazing opportunity: One of SA's ambassadors for my dream product range!

Huddled into one of the bead encrusted private circles at the Circle Bar in the Crowne Plaza Johannesburg, there sat 10 hand picked ladies with lipstick.

Let me backtrack a touch so that you understand why this moment is not about makeup of the success of my blog or an exciting career moment.

Years ago I used to teach things like affirmations, visualisations and the very practical parts of manifestation and laws of attraction. My angle was and will always be very different and half the time I was saving the reputation of the Universe because as people said their first affirmation, something usually fell apart in their lives. Well, if you were moving in the right direction before the vision board was stuck up in your office then nothing would need to change, now would it?

I got affirmations and vision boards wrong myself when I first set out and when I look at the pictures I plastered all over it, it is a reminder of how far I have come and that's what drives me forward. I have no intention of redoing my vision board for that very reason.

So the other day a friend of mine asked me how I am managing to manifest so many things that I have visualised and I found it almost impossible to explain. The more I thought about it the more it became so very clear how I have manifested certain things down to how I imagined it in my daydreams.

Dreams are wild and they are many, but I think we have a habit of focusing on the bigger ones and not taking the littlest things as a confirmation of the power of our ability to manifest. Because 'project me' has made me focus on every day and look for the positive, conscious and fearlessness that lies within me, I have been lucky enough to see those little things as my own power to manifest.

In steps Bobbi Brown makeup and most probably one of the greatest gifts I have managed to manifest for myself. After this, I swear I know I can do anything that is within my purpose and integrity (yep, very strategically worded ... hint, hint for those trying to figure out how to manifest!).

After manifesting sponsorship on my blog, I had glimmers of realising I could do anything I wanted to. I think because money hasn't flowed like water, it would have been so easy for me to say I am failing, when in truth, if I manifest the tiniest thing i dream of, I am living and succeeding.

Greggie isn't the average gay best friend (okay I stuffed that manifestation up after an overdose of Will and Grace) because he doesn't want to go bra or makeup shopping with me, but he does know Bobbi Brown! Why? Because I've been saying it for nearly 2 years to him! My mom knows, some of my friends know, my dreams certainly know just how much I love Bobbi Brown makeup and how I have been saying, for months, that I would give anything to have Bobbie Brown on board with 'project me'.

Somewhere along the line I manifested something tiny, that I was so?ecstatically?grateful for and that made me realise I could manifest the next thing. When I reached that next thing I must have been so ecstatically grateful and I realised that I could then manifest something greater, bigger and better. Then I manifested the partnership I have dreamed of with 'project me' and I am so ecstatically happy that I have realised there is more, bigger, better and greater just waiting out there for me ... the only difference is my lipstick officially matches my powerful dream!!