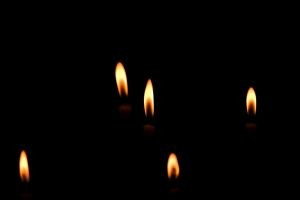 Without power in the midst of Johannesburg - Project me day 117

More than 20 hours later and I'm still without power. No electricity for so many hours is sure to have a person spending a good amount of time either with themselves or with the people they share their home with.

I know I promised my mom that I wouldn't blog about my family, but things have changed since the humble beginnings of 'project me'. Mostly, I've changed and I'm not as concerned about the consequences of sharing the mayhem that goes on around me as I choose to live back home while I slowly rebuild my life after some whirlwind career choices.

In the craziest and sweetest ?way possible I can say that my family home went into total ego and chaos after a few hours of no television, hot water for tea and fading cellphones and laptops. The worst thing that you can do is put all of us kids (5 of us) into a room for too long. Luckily one was missing ... but 4 in a room can cause just as much ego table tennis. The issues are never that major (and that what mom doesn't understand ... we can all be in the room together at least!)

So we are hanging out and everyone's getting very ratty and on edge. Everyone except me of course. I'm snug under a blanket and enjoying the humourous entertainment that is going on about me. I learned so much about myself yesterday ... firstly, that I really am seeing everything as fun. ?I covered mom with lots of blankets and snuggled under one myself, enjoying the silence and grateful that this had happened on a public holiday and not on a day when work would be effected. Um ... then why is everyone else so upset that this has happened on a public holiday. It's like Johanneburg city power went out of their way to ruin everyone's day off. I'm thinking this is what you should do on a cold public holiday anyway.

Barring the lack of tea ... but we even managed to get a little camping gas stove thing going and warm some of mom's chicken soup. Um ... no one like the soup! Except me of course! Why? Because I'm not a fussy eater and would much rather not be cold, moaning or hungry when there's chicken soup! What's the crisis you may ask ... mom through all the lettuce into the soup because it's too cold for lettuce and she didn't want it to go to waste. It's like there is a flashing neon sign stating that lettuce shouldn't be cooked up in soup ... spinach is ... isn't that just dark lettuce?

My brother was a gem, trying desperately to get hold of someone at city power to find out how long the electricity would be off for. Guess what? No one was answering the phone! I wouldn't either if I was an employee of city power. What are they supposed say if there is half of Johannesburg calling with the same crisis? It does make me wonder why they didn't just put on a recorded message that said they know there's a crisis and someone's onto it. My brother, on the other hand, uses up all of his airtime and battery trying to find the answer.

The tattoo came up ... ok, I bought the tattoo up because I haven't seen my one sis for a while and wanted to show it to her. Well ... the comment was thrown at me that my dad would have freaked (being Jews shouldn't have them). My response was my truth ... and a huge pat on the back for how far I have come in "project me" and speaking my truth. "Yes, dad would have had a fit and that's why I'm doing it now that he's not here because now there is unconditional love and he doesn't really care!" ... Well done Jodene!

What differnce does it make? We are warm under blankies, there is hot soup, its a holiday and we should be chilling ... worse case ... we won't get it back at all today.

Well then what about the food in the deep freeze and fridge ... um ... it's 20 hours later and it's still cold in there!

I had the best day! I was in bed by 7pm (I did crawl into mom's bed and stay there). We jabber jabbered about love, friends, lovers and the madness of the family. We also spoke about what the day would have been life if my dad were alive.
He survived on oxygen for well over 6 or 7 (it could be more because I don't remember him without his oxygen tank) year of his life and we would have inevitabley had to take him to hospital in the end. He would have tried to make another plan because he hated hospital and the fight would begin. His fingers would turn blue and he would start his slow pants to try increase the oxygen, all while we begged him to go the hospital and my mom called a doctor to also try force him. By this stage my mom and I was laughing at what he used to put us through, but I know we both wanted to cry.

We walked around with the Friday night Shabbos candlesticks which are ornate silver?candelabras while my mother called for the imaginary lady in waiting in our Victorian fantasy.
Somewhere in the house ... everyone else was huffing and puffing ... tee hee!

We still don't ?have power and I'm trying to catch my breath now that I'm in the office because I did have a few things to do yesterday and I don't know if I will have power tonight at all. So the fun and games continue ...

PS ... what did I say about Mercury retrograde ... as I sat all alone with myself in the darkness with no communication whatsoever ... good one Miss Universe!